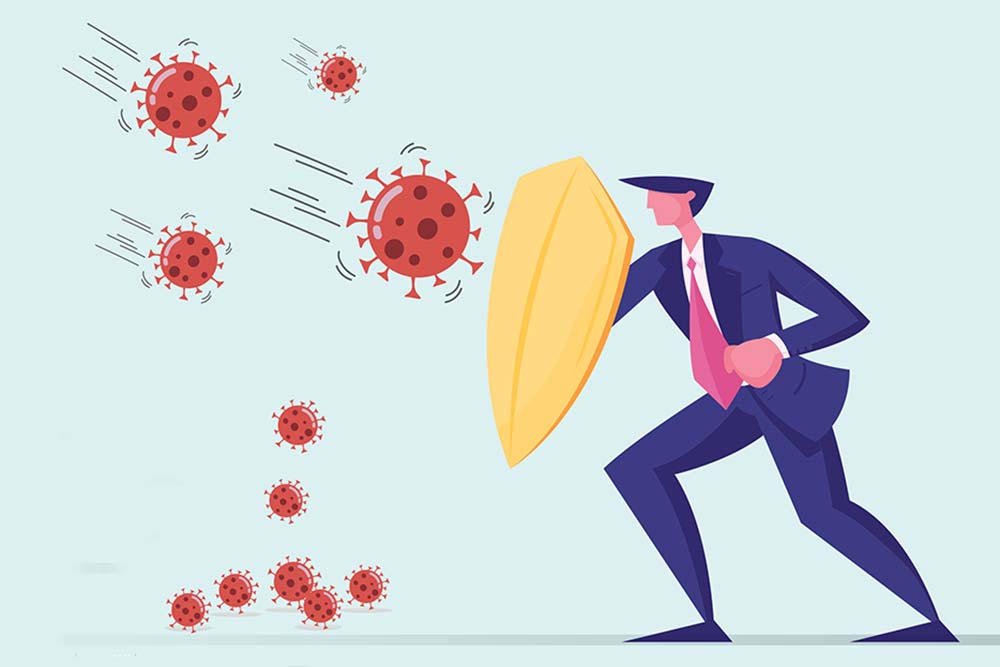 A third wave of the Covid pandemic looms large on India with speculation going rife that the onslaught is expected in a month or two. With its 66 per cent eligible population being vaccinated, the authorities seem more confident this time to fight the pandemic, but fears run high among people about yet another round of lockdown and disruption of social and financial life.

Fast recovery in economic parameters and a booming equity market seem to be soothing the frayed nerves of the investors and also allaying fears of a fresh financial bloodbath. “Even if the third wave hits India in the next couple of months, we don’t see a correction of over 5-6 per cent in the markets as the economy is doing well,” says Shrikant Chouhan, executive vice-president, equity research, Kotak Securities Ltd.

Another positive is that India has started giving more than 40 lakh vaccination doses per day, as per the July average, with the objective of inoculating the entire adult population (approximately 188 crore doses) by December 2021.

“I don’t see the markets correcting due to the third Covid wave. Remember, we did not see the third wave impacting market sentiments in the US and the UK,” says Sunil Damania, chief investment officer, MarketsMojo. He adds that (equity) markets never correct twice for the same reason.

There is the recent precedent of the second wave among market-watchers for this bout of confidence. “If one looks at the impact of the second wave on the market, it was fairly muted, with a correction of 5-7 per cent initially. It recovered over the next couple of months,” says Dhaval Kapadia, director, managed portfolios, Morningstar Investment Adviser India.

This was unlike the onset of the first wave when the markets corrected by 35-40 per cent in India and by similar margins across major global markets. A partial lockdown as opposed to a full lockdown (in the first wave), strong export growth for certain sectors due to resumption in global growth, strong liquidity and availability of vaccines were what kept equity markets buoyant during the second wave.

“In case a third wave hits, the impact on the markets would depend on its severity and spread across the country and on whether fresh full or partial lockdowns are imposed,” says Kapadia.

Besides, the vaccination drive has been picking up. In case of low to moderate severity of the third wave, the impact on the markets may be muted, and in case state or central governments are forced to undertake strict lockdown measures, the impact could be bigger. “Markets may correct at 10-15 per cent during the third wave depending on the (vaccination and lockdown) scenario,” says Palka Chopra, senior vice-president, Master Capital Services.

“We also believe that the markets are partially factoring in a third wave later during the year, which should further help in limiting the downsides,” says Jyoti Roy, DVP- Equity Strategist, Angel Broking.

So, while coronavirus and its associated demon of lockdown may not have much impact, do remember that there are other speed-breakers in the markets run.

“Many sectors in the market are showing signs of weak momentum,” says Chopra.

“The valuations of Indian market would play an important role in the coming days,” adds Chopra. How the US dollar moves may also have its impact. Let us assume a worst case scenario and that markets correct. What would happen next?

“Experts aren’t ruling out the third wave. In case of its occurrence resulting in a market correction, the recovery would depend on the severity and duration of the third wave and associated lockdowns,” says Kapadia.

“Nifty 50 faces selling pressure whenever it comes near the 15,900-16,000 range,” says Chopra, guiding on possible future trends and levels on the bourses. Though the bulls are trying hard to move the markets but at these zones supply comes in and markets may be range-bound.

“Even if there is a third wave, Indian markets are already discounting it with the markets consolidating at 15,900 levels,” says Chouhan.

So we have a probable idea of how the equity markets may look going forward. But the Nifty 50 is just a benchmark in a sea of listed companies. As of July, there were just under 2,000 companies listed on NSE. So unless we invest in an ETF (exchange-traded fund that mirrors the Nifty), how is the investor to look at the churn on the bourses?

“There was a clear trend among various sectors during the second wave with steeper declines in domestic cyclical sectors like banks, financials, PSU companies, autos and real estate,” says Dhananjay Sinha, managing director and chief strategist, JM Financial Institutional Securities. Investors switched to global sectors like metals, IT, consumer and pharma. “Thus, while the indices remained mostly steady, higher volatility was experienced in the sectors that were perceived to be impacted the most,” says Sinha.

However, we also saw that the markets rebounded quickly when the second wave subsided, making new highs in the subsequent months. Sectors that got impacted the most also rebounded the most.

“Thus, it appears the market tends to learn from the shocks (of the second wave) and demonstrate greater reliance,” says Sinha.
So we can certainly build on the experience of the second wave to know which sectors will be resilient and which will be affected if the third wave batters us.

“As we have seen during the previous Covid waves there is bound to be some sector rotation and we expect IT, chemicals, healthcare services and pharmaceuticals to do well in case there is a lockdown due to the third wave, while sectors like auto, consumer durables, BFSI, multiplexes and hospitality will be negatively impacted,” says Roy.

“Defensive sectors like FMCG, pharmaceuticals and IT are estimated to do well if there is a lockdown in the third wave. We may see some more attraction for metals as the shortage will increase and prices will soar,” says Chouhan.

Entertainment, aviation, retail, hospitality, leisure and discretionary consumption would be negatively affected by the third wave.

Remember that in equities, most sectors and pockets have seen a rally on a rotation basis. There are only a handful of stocks in each sector where there is scope of getting returns. “One can look at select stocks from each sector where earnings growth is likely to be high and valuations are reasonable. It is going to be a stock-picker’s market from here on,” says Chouhan, who has an end-FY22 target of 16,500 points on the Nifty 50 with a variation of 500 points either way.

“Given the fact that the impact of the third wave is expected to be lower than the first wave, investors will do well to remain invested in fundamentally good stocks from a long-term perspective as we expect strong recovery in CY22,” says Roy.

Another positive is that India would have vaccinated a significant portion of the population by the end of the year, thus reducing the risks of further outbreaks down the line.

If you are a risk-averse investor and do not wish to invest in fixed deposits but are looking for tax efficiency, short-term bonds can be an attractive option. Similarly, depending upon your investment horizon, you can invest in small savings instruments. “Risk-averse investors can include mutual funds and bond funds to avoid the risks arising out of direct investing,” says Palka Chopra, senior vice-president, Master Capital Services.

Stick to your asset allocation plan as short-term market movements are notoriously difficult to predict as we’ve seen over the last 12 to 15 months. In case of sharp market corrections, long-term investors can add more equities to their portfolios. “At least 10 to 20 per cent of one’s portfolio can be diversified globally, including US, Europe and other emerging markets,” says Kapadia.

“Investors must never bring in emergency money to enter into the stock markets,” emphasises Damania. Invest in equities only with a minimum of three to five years and never borrow money to invest in the equity market.

Various countries such as the UK, the US and some European nations have witnessed multiple waves, but are better placed now due to accelerated vaccination and wider population coverage. India, due to its lower vaccination coverage, is more vulnerable to fresh waves.

“In such a scenario, there could be bouts of FPI (foreign portfolio investors who constitute a major chunk of the investments into Indian equities) inflows and outflows over the short term. However, over the medium to long run, FPIs would tend to focus on growth prospects and valuations,” says Dhaval Kapadia, director, managed portfolios, Morningstar Investment Adviser India.

“FPI flows will be determined by the path of economic performance,” says Dhananjay Sinha, managing director and chief strategist, JM Financial Institutional Securities. If the impact (of the third wave) in India happens to be more severe than the second wave and developed economies fare better, market volatility (in India) can be somewhat larger.

This risk can also increase if global liquidity starts moving towards normalisation, as hinted in a recent US Federal Reserve note. “So I advise investors to tread with caution,” says Sinha.

“Over a time frame of 2-3 years, the Indian equity market looks attractive on the back of rising capex cycle and the government’s push for business-friendly policies,” says Rajeev R. Shah, managing director and CEO, RBSA Advisors.

The author is a financial journalist

Epoch Of Change And Renewed Experimentation

Is The Grass Greener For Unicorns?

Should You Opt For A Fixed Rate Or A Floating Rate Home Loan?