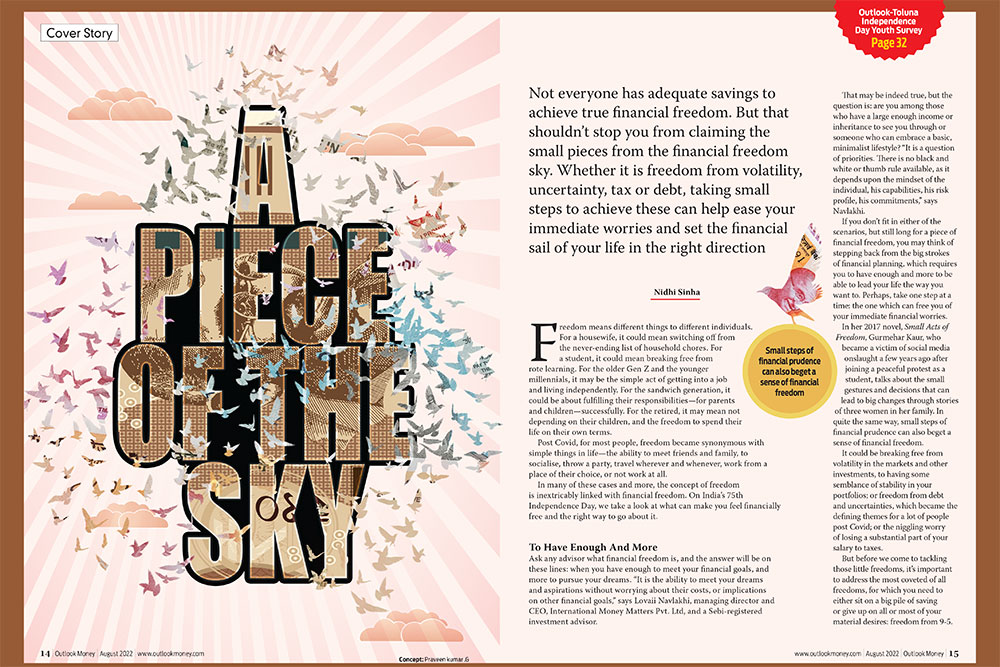 Everyone loves financial freedom, but few can cherish it. Siddhesh Jamsandekar (Freedom From Debt) was one of them. He very thoughtfully and intelligently planned and prepaid his car loan with the profits he made from his systematic investment plan (SIPs). That’s worthy of emulating.

Regarding Freedom From 9-5, only those from a privileged background with solid financial backing from home will have the luxury to quit a well-paid job and go back to their native place to start on their dream project, as their basic necessities of food and shelter will be taken care of at home.

The real 9-5 freedom will be when someone quits a well-paid job, and after years of hardship and entreprenuership finally becomes financially stable as before.

I have been a regular reader of Outlook Money for some months now. The article Freedom from Debt, which appeared in the August edition, has refreshed the memories of my experience of financial troubles I faced some three years ago as debt piled up. I had a car, personal and house loans going simultaneously. Yet, my income was good, and I was confident of repaying them, and before long, a stroke of misfortune became a living nightmare. To escape from the high-interest rate of the personal loan, I took a top-up on my housing loan to close the personal loan account. Although I was still paying for three loans, the burden had slightly reduced. Eventually, I had to sell the house to pay off the creditors. In one fell swoop, I lost everything I had owned. I have learned a vital lesson that ill-conceived goals can get you into trouble faster than you realise.

The article New Ball Game is an interesting read. It was fascinating to know the mechanics of play-to-earn games (P2E). However, there are many dangers of frauds and scams lurking in the GameFi world. Unlike online games, the P2E gaming platforms have opened a new dimension to real-world financial dealings. As a result, the P2E space has become a stalking ground for criminals. The Axie Infinity’s Ronin token bridge hack is a prime example. The best way to reinforce cybersecurity now could be to enhance the bug bounties for ethical hackers that find bugs in the project’s ecosystem and regular platform-wide audits, including tokens. As an avid gamer, I want them to boost their security so that the gaming community can grow by keeping the bad actors away and benefit from what the technology can offer. Unfortunately, many of the GameFi and P2E platforms have prioritised profits over security and soiled the reputation of the entire blockchain gaming industry.